Aidan and Aryn Build a Bear 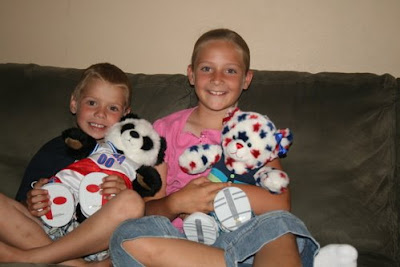 I am not a person who enjoys throwing parties for any occasion. So in place of a birthday party I let Aidan choose a friend and choose something fun he would like to do for his birthday. This year he has told me for weeks that he wants to go to Build a Bear Workshop. I told him that was a fabulous idea and I told him to think of a friend he would like to take with him. He chose Aryn. He loves playing with Aryn and she is so good to him. So we went today. We had a lot of fun! I was really disappointed when I got to the mall and realized that I forgot my camera! But it was okay because I got to enjoy the time hanging out with Aidan and Aryn and wasn't worried about taking pictures. So we came home and took pictures. Aidan chose a panda bear and named him Panda. Aryn chose a bear with stars and named her Stars. They got to make their bear, give it a bath, choose an outfit, named it and got a Condo for it. They gave Aidan a little birthday gift and he got to ring the birthday bell and the whole store told him happy birthday. Then they came home and played with their bears all afternoon. It was the best birthday party I ever had to throw. I highly recommend it!
Posted by Bobette at 2:41 PM